When it comes to writing or reading reviews, I'm never massively fond of comparing a piece of theatre with the same story from other media. It always seems a relatively reductive argument, to discuss a play's merits in conversation with, or in contrast against, a film, novel, or other piece of work. Saying "I felt that the production lacked the psychological intensity of the original book" or "this staging failed to capture the film's frenetic pace" always reads (at least to me) as an exercise in showing how wide, knowledgeable and penetrating the reviewer's wisdom is.

David Greig's stage adaptation of Solaris - originally a novel by Stanisław Lem, then made into two films by Andrei Tarkovsky and Steven Soderbergh - seems unfortunately predestined to this sort of comparison. The original story (reproduced relatively faithfully by Greig, with a handful of flourishes and tweaks) sees a scientist, Kelvin (here played by Polly Frame) arrive on a space station orbiting the ocean planet Solaris, only to find its crew in varying states of mental collapse due to the planet's intrusive, impossible and utterly unfathomable abilities to get inside their minds. Cue much psyche-wracking, purpose-questioning and philosophical reflection, in the grand science fiction tradition. The unanswerable questions at the heart of the novel - what is Solaris, what is consciousness, what is life? - continue to draw us back to this story, making this latest retelling seems perhaps doomed to live in the shadow of former engagements. Happily, I've not seen the films, and wasn't totally in love with the book when I read it some years ago. So huzzah and hurrah, I can't make these links! It can be judged on its own merits, as a play, and not as a knock-off live film! 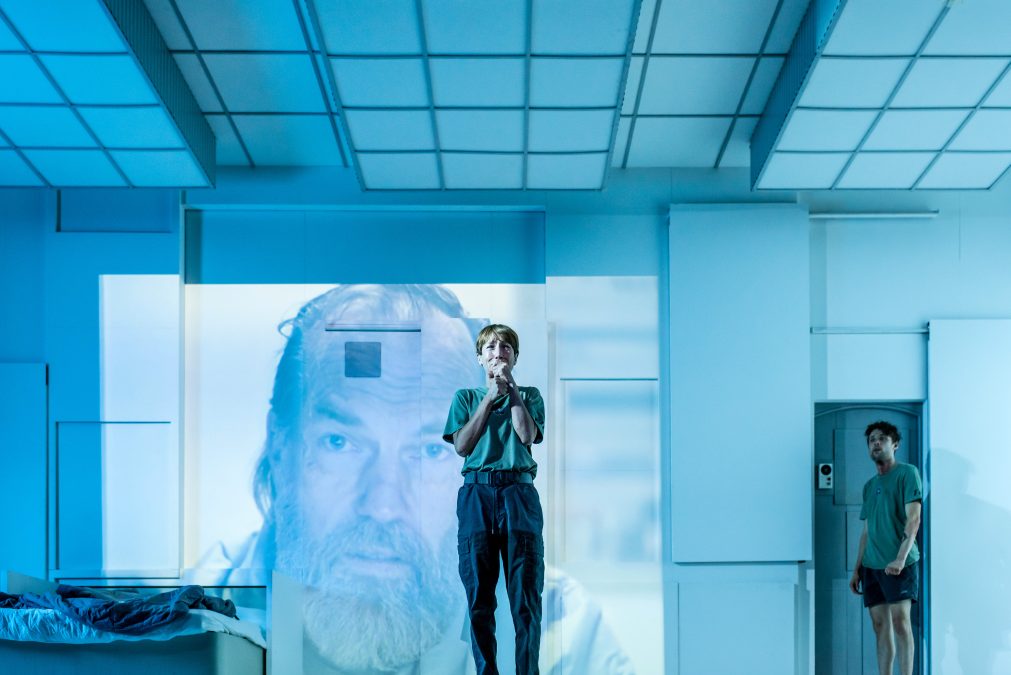 Imagine my disappointment, then, when this production - a co-venture between Greig's Lyceum in Edinburgh, and Melbourne's Malthouse, which also made its way to London's Lyric Hammersmith - felt like it was purposefully chasing (and was problematically wedded to) a particularly cinematic kind of staging. Everything - acting, costume, dialogue - seemed to be calibrated towards crafting a claustrophobic atmosphere which, while presumably meant to evoke the enclosed and entrapping passages of the Solaris station itself, instead resembled a strangely filmic intimacy - something which the play could imitate, and partially replicate, but crucially could not truly evoke, or (more importantly) transcend.

This was a feeling I could not shake; wherever I looked, I found my gaze pointed away from the stage, and towards the screen. Matthew Lutton's subdued direction evoked the initial, tense scenes of Ridley Scott's Alien, minus the eventual terrifying payoff; while Scott's film eventually burst the dam of slow, dialogue-driven focus of its early mood to descend into a monstrous sprint for survival, Lutton kept the action trundling along at a relatively flat, un-undulating pace, going nowhere slowly. Similarly, Hyemi Shin's sparse set design relied on whiteness and simplicity to communicate "space station" but seemed uninterested in pushing even slightly beyond that; everyone knows what a space station looks like because they've seen sci-fi films, so why explore it any further? Completing this rehashing of other media was the fact that the stage was framed by a black border, which made me feel I was looking at the action through a TV set, and the frequent appearance of a giant black screen which descended sedately at the end of each scene, like the world's slowest smash cut. And the most compelling performance - Hugo Weaving's pensive, recently-deceased Dr. Gibarian - was delivered cinematically, projected onto a wall. Just as these diary records were played posthumously by Kelvin, the film literally haunted the production.

What I'm trying to get at is that this Solaris didn't justify its existence; all it did for me was emulated a quality and style that I more typically associate with cinematic science fiction - if not with the former adaptations of this particular story, then at least with other classic SF films, from Alien to Arrival. And against such fantastic pieces of work, on the terms it set for itself, it can only fail. And when I say "this Solaris", I'm trying to convey that there was very little here to distance me not only from the other versions of the tale, but from other media in general. It didn't stand on its own two feet, but existed in reductive conversation with other, better forms of storytelling; there was little here that seemed innately, uniquely theatrical.

All of which got me thinking: what makes a great piece of theatrical science fiction? Looking towards something like Anne Washburn's Mr Burns, or Jennifer Haley's The Nether, I'd say that the X factor in both plays was their embracement and celebration not just of the sci-fi ideas (which Solaris had in spades), but the theatrical potential of those ideas (which Solaris did not). In Mr Burns, post-apocalypse rubbed shoulders with performance, its characters choosing to comprehend the end of the world by telling stories in the form of theatre; in The Nether, the complicated business of virtual reality was told through the even more complicated business of live bodies, interacting simultaneously in a digital world and on a physical stage. In both cases, the liveness of the production did not just serve the story well; it was integral to how it was told.

And that's the problem with this Solaris; its theatrical potential was muted, and it simply told an already well-told story on stage, with some people speaking in real time instead of on a tape. It reminded me, in different ways, of two other productions: first, the National Theatre of Scotland's Interference (which I reviewed here, and was also relatively unsatisfied with). NTS have a fantastic "theatre without walls" policy, and it allows them to play with shape, space and form in interesting ways - yet while Interference was performed in an unusual venue, it reconstructed the least interesting of all theatrical walls (the fourth one) by keeping the audience at a distance from the action. Second, and probably inevitably, is the shadow of the other recent space station play, Alistair McDowall's X, which is a properly bonkers and brave play full of multiple, contradictory meanings, but its original production at London's Royal Court retained (like Solaris) a disappointing degree of realism and cinematic distance that muted its more exciting ideas. Compare this to Ned Bennett's production of McDowall's Pomona for Richmond's Orange Tree Theatre, which capitalised on the play's madness and mystery by constantly shifting our perceptions of what might happen next.

There's no list of ingredients for a good piece of theatrical science fiction - or for any type of play whatsoever - but I'd hazard a guess that the more startling the story, the less conventional a production it demands. Plays like X and Solaris ask big questions not just about life, the universe and everything, but how we might conceive of such stories in the limited (and simultaneously unlimited) space of the physical stage. I'd love to see Greig's Solaris tackled, NTS-style, in an unexpected venue, with an artistic approach that didn't just settle for showing us a space station based on what we've seen elsewhere, but instead exploded our expectations, delivering something less structured and more conceptual, less recognisable and more alien. I desperately wanted this to be a play which found an exciting form for a compelling story, matching method to content so that - like the unknowable mystery of Solaris itself - it continually messed with my head.

Home of the Wriggler